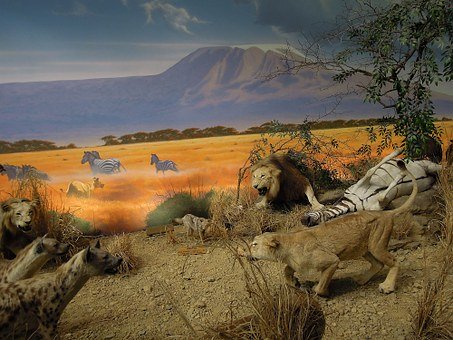 Do Lions eat Hyenas? Yes/No. In this article, we have answers to your lions and hyenas-related questions.

Lions have strong teeth, compact bodies and powerful forelegs, and jaws for hurting and killing prey. They have yellow-gold coats color, and adult male lions have thick, long, shaggy manes. As young lions grow up, the light spotting on their coats will disappear.

Many years ago, lions thrived from South and North America to Europe, Africa, and Asia. But presently, following climatic changes, and after many years of hunting them and also environmental degradation by people, they live in scattered habitats in Africa continent.

In this article, we will be focusing on Lions and Hyenas, the competition between these two apex predators. To begin with, Hyenas are extreme scavengers. Hyenas scavenge a carcass to its last bone, which has the tiniest of the meat stuck to it. Also, hyenas have the same habits as ventures; they consume the stinkiest meat.

From research, it was documented that hyenas stores some of the meat of its prey in water graves to be consumed later on. This act of hyenas extreme scavenges makes their meat taste bad, as assumed by some biologists.

Due to the bad taste of hyena’s meat, lions do not eat hyenas in many cases. In lots of documentaries, you will see that Lions and hyenas are two fierce predators who engage in a constant battle over meals.

Lions and Hyenas are two predators living in the same area; they compete for food, preys, and sometimes engages in a fight.

Reasons, why lions and hyenas end up fighting, is because:

Ever watched the Disney movie “The Lion King?” In the movie, you will see a part where Mufasa was tearing the herd of Hyenas in pieces. In reality, Do lion kill Hyenas and eat? Let analyze it.

In many scenarios, a lion attacks a hyena by the neck or on the back, paralyzing the legs and living it to die.

I have seen hyenas eating hyenas, hyenas eating lions, but it is rare seeing lions eating hyenas. Sometimes not all carnivores like the taste of a particular meat, some biologist claims that hyenas meat are not tasty for lions. Hundred of years ago, Archaeologists who were excavating Europe discovered lion bones in Hyena dens. This explains why the battle is never ending.

We will discuss in-depth the fierce battles between Lions and Hyenas. In the remaining part of this article, we will explain futher

Why do lions and hyenas Engage in a fight?

These two big wild animals are apex predators. They hunt for the same food and stay in the same territory.

Primarily, lions see hyenas as pests, and that’s why they treat them as one. Hyenas actively go after lion cubs to kill and eat them. When lionesses are in small number, hyenas bullies them, and steal their kills. Hyenas kill lions cubs to reduce competition and for food. So, lions kill hyenas to also reduce some competition and increases the chances of their cubs’ survival. These acts alone cause lions and hyenas to engage in a fight.

It takes only 2 powerful adult male lions to fight a group of about 20 hyenas. It’s the male hyenas that have this extreme scavenging habit. If a male lion has not eaten for days, and they are able to kill a female hyena, out of necessity, they will eat the soft underbelly part to gain energy.

Between Male and Female hyena who hunt most?

Some male hyenas that are considered the lowest in the hierarchy of a hyena society possess the extreme scavenging habit. They don’t get many opportunities to partake in a kill whenever the whole clan is feeding. So for them to survive, they have to resort to these types of scavenging habits.

What do lions and hyenas eat?

Lions and Hyenas are both wild animals. They are carnivorous animals, which means they eat meat; they feed on other animal’s flesh. Hyenas are scavengers that dine on the leftover of some predators.

Are lions and hyenas enemies?

As portrayed in most movies and cartoons, lions and hyenas are not enemies. As earlier discussed in this article, Lions and Hyenas are competition for each other- they live in the same territory and hunt for the same prey.

Both animals are pests to one another. In wildlife, the lesser the competition, the better for some predators to survive. Lions and hyenas are not enemies; it’s all about survival of the fittest.

Yes, lions do steal hyenas’ food. Females weigh 270 to 300 pounds, and Male lions weigh from 330 to 530 pounds. Considering the advantage lions have over hyenas and their size, it is easy for lions to enter the hyena’s clan, fight them off and steal their food.

This will save lots of energy for lions by not chasing prey themselves. For instance, to kill a buffalo takes lots of energy and time, instead of stressing, lions can simply fight off a clan of hyenas to steal their food.

Who wins in the fights between lions Hyenas hyenas?

Generally, considering the mightiness, weight, and sizes of lions, you will agree with me that lions will win. Lions are much stronger and powerful. Hyenas are aggressive scavengers, but in a fight, lions have the upper hand when you consider their strength.

From studies, hyenas have a stronger jaw than lions; they can crush a human skull in minutes. The only advantage hyenas have over lions is that they rely on teamwork. They target and attack their prey in groups. If they come in a group of about 20 hyenas, they are not intimidated by the size of lions. The teamwork of hyenas can be seen in any fight with lions. These two big wild animals fight mostly because of food. Hyenas mostly attack a lonely lion. They surround and start attacking from every angle.

A group of about 10-20 hyenas, it won’t be easy for them to bring them a full-grown male lion. Another big advantage lions have over hyenas is their power paw. A swing of its paw or bite can be really FATAL.

In a fight, a lion has the upper hand, but that doesn’t mean a group of hyenas isn’t fatal.

This post is “DO LIONS EAT HYENAS” we hope you enjoyed this article. It’s an eye-opener for most people who don’t know how lions and hyenas survive in their territory.